At this point, it’s become abundantly clear that Donald Trump’s brazen rhetoric and unorthodox campaign strategy (which primarily involves simply saying whatever pops into his head with no filter whatsoever) isn’t a liability.

In fact, the bellicose billionaire’s style and penchant for controversy has catapulted the real estate mogul to the top of the polls leaving but one serious challenger (Ted Cruz) for the GOP nomination.

Recently, Trump has taken aim at Hillary Clinton, calling her “disgusting,” a “liar”, and insisting that she’s “married to an abuser.” His first television ad opens with a black and white image Obama and Clinton who are referred to only as “the politicians” (a nod to Trump’s contention that he’s trustworthy precisely because he comes from outside the Beltway, so to speak).

A new poll shows that may be a miscalculation.

According to a survey conducted by Washington-based Mercury Analytics, 20% of likely Democratic voters say they'd cross sides and vote for Trump. Here’s more from US News & World Report:

So if Donald Trump proved the political universe wrong and won the Republican presidential nomination, he would be creamed by Hillary Clinton, correct?

A new survey of likely voters might at least raise momentary dyspepsia for Democrats since it suggests why it wouldn't be a cakewalk.

The survey by Washington-based Mercury Analytics is a combination online questionnaire and "dial-test" of Trump's first big campaign ad among 916 self-proclaimed "likely voters" (this video shows the ad and the dial test results). It took place primarily Wednesday and Thursday and has a margin of error of plus or minus 3.5 percent.

Nearly 20 percent of likely Democratic voters say they'd cross sides and vote for Trump, while a small number, or 14 percent, of Republicans claim they'd vote for Clinton. When those groups were further broken down, a far higher percentage of the crossover Democrats contend they are "100 percent sure" of switching than the Republicans.

When the firmed showed respondents the Trump ad, and assessed their responses to each moment of it, it found "the primary messages of Trump's ad resonated more than Democratic elites would hope."

About 25 percent of Democrats "agree completely" that it raises some good point, with an additional 19 percent agreeing at least "somewhat."

Mercury CEO Ron Howard, a Democrat whose firm works for candidates in both parties and corporate clients, concedes, "We expected Trump's first campaign spot to strongly appeal to Republican Trump supporters, with little impact – or in fact negative impact – on Democratic or independent voters."

He continues, "The challenge to Hillary, if Trump is the nominee and pivots to the center in the general election as a problem-solving, independent-minded, successful 'get it done' businessman is that Democrats will no longer be able to count on his personality and outrageous sound bites to disqualify him in the voters' minds."

Right. And that's precisely what we've been saying for months. Put more simply: Trump is gaffe proof, which means it isn't about how many outlandish things he says, it's about whether he can craft a coherent narrative.

As the campaign drags on, his message is starting to sound more like an actual policy platform and less like an ad hoc series of soundbites.

And that's a very dangerous thing for the Democrats.

ArtichokeSap
reply
Keep reading: From the article sentence "while a small number, or 14 percent, of Republicans claim they'd vote for Clinton."

reply
He might get 20% of democrats, but I think that at least that number of republicans would defect to other candidates. I myself would vote libertarian.
Colorado Plateau

zippy72
reply
It's dangerous for everybody, I'd say
FourSquare, qv

First, as a mere contractor, Snowden was not covered by whistleblower protections.

Second: he did in fact try going through established channels, but as expected, nobody cared.

The third point is perhaps most important. To illustrate it we use the example of Darrell Whitman who worked as a San Francisco-based investigator for the Whistleblower Protection Program - the very Federal agency tasked with offering protection to whistleblowers - when he went public with claims that the agency failed to defend workers who faced retaliation for reporting illegal activity and public safety concerns.

In an interview with NBC Bay Area earlier this year, Whitman said he tried to warn OSHA leaders that his managers pressured investigators to close complaints without proper review to clear a backlog of cases.

Whitman said his supervisor altered his reports by changing his conclusions and dismissed cases even when Whitman found they had merit.

It didn't stop there: Whitman wrote letters to OSHA leadership and to the U.S. Secretary of Labor, Thomas Perez. "I had gone through every conceivable channel and what I saw was inaction," Whitman said.

In the end Whitman told NBC Bay Area that he was fired as retaliation for raising red flags about the agency.

"They got rid of the squeaky wheel," Whitman said. "I was going to report what I thought to be violations of law and policy. They were going to have to answer to those reports and they didn't like that."

The letter announcing his termination said Whitman had been fired for six separate reasons, including "lack of candor during an investigatory meeting" and "unauthorized release of government documents."

Whitman said the "real reason" he was fired is because he took his concerns public.

To summarize: a whistleblower who worked for the Federal Whistleblower Protection Program was fired for blowing the whistle on his employer: the very agency that was supposed to protect him.

And now, back to Hillary who told the nation with a straight face that the person who was about to expose the most Orwellian espionage nightmare in US history, should have followed the proper channels and that there "would have been a positive response to that."

In the 60s, Marvin Minsky assigned a couple of undergrads to spend the summer programming a computer to use a camera to identify objects in a scene. He figured they'd have the problem solved by the end of the summer. Half a century later, we're still working on it.
Read the whole story

ArtichokeSap
reply
Couldn't you write a program to do that?

The Pentagon's lawyer said the deal to swap the Army sergeant for Taliban prisoners wasn't a first, citing the release of an Army pilot in Somalia. But the man who engineered that release disagrees. 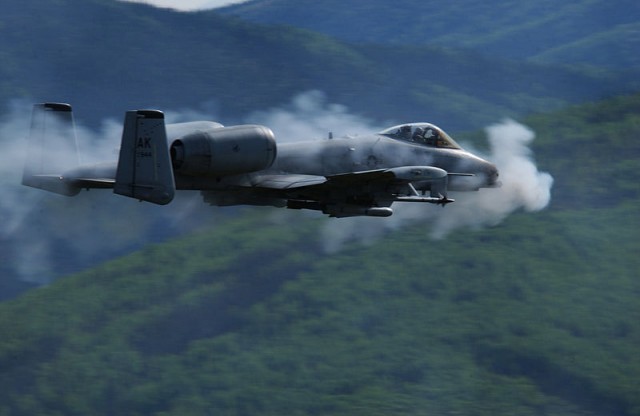 A US Air Force A/OA-10 Thunderbolt II surrounded by a cloud of gun smoke. The Air Force wants to send the A-10 to boot hill to keep funding for the wounded F-35 intact.
US Air Force

The Warthog may live to fly another day—or another year, for that matter. The A-10 Thunderbolt II, the venerable Cold War era attack plane built by the now-defunct Fairchild Aerospace Corporation, has fans in Congress pushing for its continued funding despite the threat of a presidential veto of the entire Department of Defense budget.

As part of its budget plans for 2015, the Air Force had planned to retire its entire fleet of A-10 attack planes. But the Senate Armed Services Committee appears poised to throw a monkey wrench into that strategy, which was aimed at freeing money to boost spending on the F-35 Joint Strike Fighter program.

On May 20, Senator Carl Levin, a Michigan Democrat, told reporters that he and a group of other Armed Services committee members have found a way to move hundreds of millions of dollars from other parts of the Air Force’s budget to keep A-10s flying. Levin said that the budgetary moves stayed within the total budget presented by the Department of Defense and did not pull from the Pentagon’s overseas contingency operations funding.

ArtichokeSap
reply
The A-10 is unparalleled in it's success at it's mission. The F-35 is a never-ending boondoggle and money pit. It's spending the tax dollars more wisely.

Air Force brass is loathe to admit total failure of the F-35 program, which they should have done years ago. But killing the whole program is political suicide, because the parts are sourced in nearly all 50 States.

Why is the Senate telling the military what vehicles they can and can not use?
California

"Dark Souls is not a game that tries to be all things to all people... Here's the kicker: Dark Souls sold 2 million units and was considered a success." ...